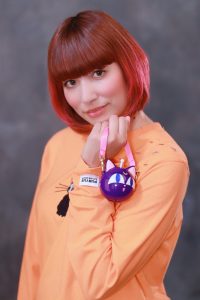 Stephanie Yanez is a Jpop music artist who has been touring the US and Japan since she won AX Idol at Anime Expo and is known for releasing an original song “Ultimate Miku World” with Hatsune Miku for gaming site TinierMe. Stephanie has released numerous original albums and cover albums in Japanese and English which are all on iTunes, Amazon, Spotify, etc. She is also a TV/Internet personality and was seen on TV as the Tokyo Reporter for Anime Select’s Comcast On Demand documentary and series “Crazy Sexy Tokyo” and is currently a host for jb LIVE with jellybeet.com. She also does runway/print modeling and collaborates with many Japanese and American companies on various projects as a content creator.